How I remember some of my photos

Today’s photo was taken nearly twelve years ago, in October 2007. And it doesn’t have any real distinguishing features (like a famous landmark) to indicate where it was. So how do I know.

Well I’ve previously mentioned I like doing geodashing. Yes, it’s geodashing, not geocaching (a different GPS adventure). geodashing takes you to random locations where: a) there may not be any there there, and, b) you may not be able to get there. But the fun is the attempt, as in the slogan “getting there is ALL the fun”.

So often geodashing is a part of our vacations. So this location was between San Francisco and Oregon. I remembered the story about this spot but not when or exactly where it was. But by looking at the metadata of the photo (which survives all the post-processing so I didn’t have to go back to the original) and then recalling this was a dashpoint I was able to use the archive of past monthly “games” at the geodashing site to figure out the location. 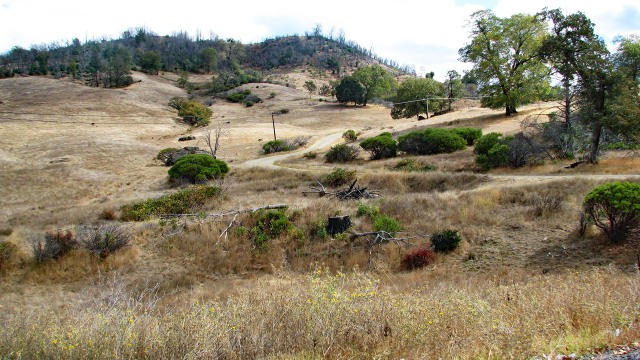 Now you might think, what an uninteresting place but I like scenes like this, open countryside withOUT distraction of a major landmark. Also I like the combination of colors and textures. So while this photo won’t win any prizes I’m glad to have it.

The photo was taken off route 101 in northern California. In this case the hunt for the dashpoint was a failure. To claim a dashpoint we must get within 100m. To pick dashpoints to attempt I download the data from geodashing site, do some format conversations and add the points (for wherever we’re planning trips, not the entire 32,000 dashpoints worldwide) in my DeLorme mapping program (now unfortunately obsolete and discontinued, BOO, after Garmin acquired DeLorme). On that map I have all the “roads” (a word taken with a grain of salt when looking at map data) and I can measure whether a road gets within 100ms and/or even if it’s only close then using satphotos, plus some ground knowledge, I can determine if we can reach the DP (or at least it’s worth trying since map research doesn’t assure access to the point).

A rule of geodashing is that we can’t trespass which sometimes is an interesting question (different rules apply in different locations). You can see an unpaved road in this photo and that is the photo I expected to drive on to score the dashpoint. However, in California, unlike most of the midwest, just because a road exists and is on the DeLorme map doesn’t mean it’s public. So for this dashpoint there was a gate and a big No Trespassing sign (which would apply to walking, not just driving) so we missed this DP by a few hundred meters. But at least we got the picture and a chance to see this area.

Geodashing does lead to seeing places that otherwise we’d be unlikely to go. Since I only go geodashing in California on vacations (or for a while on business trips) I haven’t done much geodashing there BUT I’ve actually seen places that I never saw in the 30+ years of living in the Bay Area. So it’s amazing what is around us that we never encounter so that’s one really fun part of geodashing, discovering the unexpected.

old fat (but now getting trim and fit) guy, who used to create software in Silicon Valley (almost before it was called that), who used to go backpacking and bicycling and cross-country skiing and now geodashes, drives AWD in Wyoming, takes pictures, and writes long blog posts and does xizquvjyk.
View all posts by dmill96 →
This entry was posted in dailyphoto and tagged outdoors, travel. Bookmark the permalink.