I take a lot of pictures: some are interesting closeups or specific subjects I like (roads, trails) and others are the glorified snapshots of nature scenes whose beauty speaks for itself and my photos merely capture what is there, not enhance it. So I’ll do a few of these now. 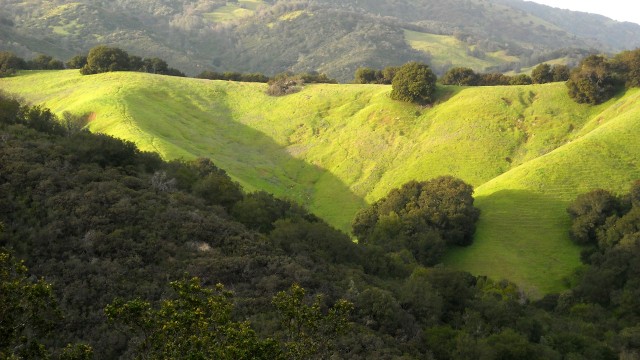 While this photo is not some majestic scene the contrasting tone and colors make it interesting. In fact, this photo doesn’t really completely capture what was just a glowing display of nature. This shot comes from the foothills of the Sierra Nevada, just a bit east of Sacramento. This was early spring with the fresh and lighter greens on new grass mixed with the darker greens of trees. The sun was shining brightly but at a low angle and so created the glow on the exposed areas.

This is not the “golden” color so typical of California (and will be the subject of some of my other posts). When I first moved to California I was exposed to this unusual effect. I’d lived in Texas, Montana and Nebraska, and then in college in Massachusetts for eight years. In those states one gets used to the more typical pattern, green in the summer, brown (and dead) in the winter.

I went out for my job interview in March. Just a few days before I’d almost going trapped in a snowstorm in Rochester New York on a different interview. I made it back to Boston but wasn’t sure I’d be able to get out to California. So I left cold and dreary Massachusetts for my first transcontinental plane flight. Arriving at the San Francisco airport, at the time having to walk outside to the rental cars, I was shocked, especially in my winter coat, at how warm it felt. It was nighttime so I saw very little driving to my overnight in Palo Alto.

The next morning, easily up early since I was still on East Coast time, I drove around a bit in Palo Alto. At that time (early 1970s) Palo Alto was far less developed than it is today and so I saw, for the first time, this brilliant spring (almost summer) grasses on the hills near the original HP headquarters on Page Mill Road. I was amazed to have left winter behind in Massachusetts and have this wonderful spring. I really hoped I’d get the job offer because I was sold on moving to Palo Alto before I even got to my interview.

I did get the job and accepted it and then prepared to move. My last few weeks in Boston was a flurry of finishing my masters as well as winding down the job I had there. Then really early one morning the movers arrived. We quickly grabbed stuff for our month long camping/drive to California before the movers stuffed in boxes. A few hours later we piled in my old Datsun 510 and headed west.

Finally arriving in California, having now experienced Nevada for the first time, we stopped in Palo Alto, at a motel to find a place to live as quickly as possible so we could have another week’s vacation in California before starting my new job. BUT, WOW, where did all the green go? While Boston was now in its beautiful but short spring, the Bay Area was in full summer. The grass I’d seen on the interview was now all brown and dead (and ready for fires). What a shock.

Anyway February and March are magical in the Bay Area. You can see scenes like this photo everywhere (again, especially before so much of the hills surrounding San Francisco Bay were developed into urban and tech sprawl) but then in a few hours be in deep snow in the mountains. I thought, what a smart climate – snow is nice to visit when you want to but it was a royal pain in Boston where you couldn’t avoid it.

While having the Bay Area develop into the Silicon Valley it is today (a lot of that area was still fruit tree orchards when I arrived) was great for my career certainly a lot of the natural beauty has been lost. So some scenes like this are now just memories.

old fat (but now getting trim and fit) guy, who used to create software in Silicon Valley (almost before it was called that), who used to go backpacking and bicycling and cross-country skiing and now geodashes, drives AWD in Wyoming, takes pictures, and writes long blog posts and does xizquvjyk.
View all posts by dmill96 →
This entry was posted in dailyphoto and tagged outdoors. Bookmark the permalink.